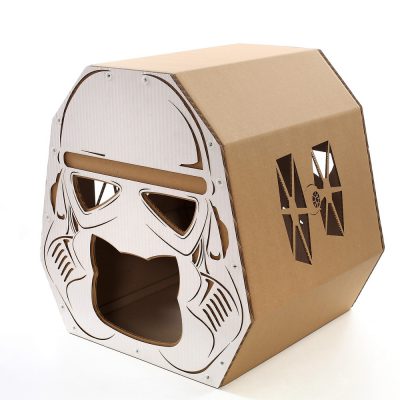 A long time ago in a galaxy far, far away there lived a cat called Anacat Roofwalker. From a very young age he felt there was something special about him. He felt some kind of intense force awakening and growing inside of him. Oblivious of what it meant, Anacat spent his kittyhood playing with his cat toys until some humans came to pick him up. They confirmed what he had already suspected: he was the chosen one. The humans worshipped him, they gave him presents and massages, they fed him with the finest cat food available and catered to all his needs.

Meanwhile, Anacat learned the ways of the force and mastered the art of mind control. As the days went by, he was getting more and more skilled at manipulating his humans into doing anything he wanted them to do. He had one problem though; he couldn’t decide which side of the force to choose. Sometimes, when he was in a good mood and the humans did everything right, he joined the light side bringing peace and balance to the household. Sometimes however, if the humans were naughty, for example if they came home late or got Anacat the wrong kind of food, the feline Jedi was filled with anger and resentment and stepped over to the dark side of the force causing havoc in the entire galaxy. Sometimes it was the humans who joined the ranks of the evil Empire and Anacat had no choice but to rebel against the regime; like that time when some human visitors from a different galaxy came over and invaded his armchair or the humans moved his cat bed without his permission!

The turmoil continued, there were casualties on both sides: some scratched ankles, a broken lamp and a torn back of the sofa on one side and some roughed up fur and a wounded ego on the other side. Until, one day the humans came home with a peace offering: the most amazing piece of cat furniture ever – the Star Wars Imperial Trooper Cat House. Finally, something that wound unite everyone; a cat cave that would bring different generations and species together; a cardboard toy that represents shared passions and childhood dreams of cats and humans alike!